F# Intellisense in Emacs - in progress

Bringing Intellisense for F#, in Emacs. A prototype

F# has two great IDEs. Visual Studio is the recommended way for Windows users, while Linux and Mac developers can enjoy Monodevelop. Both are great, have many nice features. Tomas did a very good job a few months ago with Monodevelop plugin for F#.

However, I cannot go without Emacs. Even at Microsoft, I have both Emacs and VS open permanently, depending on what I am doing. I am not the only one: Many people love this great editor. It is more flexible and better for text edition than most other softwares. Some colleagues told me: "I wish I could use Emacs when writing F# code." But Emacs lacks some features other IDEs have.

Thanks to the November release of F# and the good work Tomas did, it is easy to use F# compiler as a service. I have made an experimental prototype of F# Intellisense in Emacs. Results are very encouraging, and I believe current limitations could be fixed quickly. 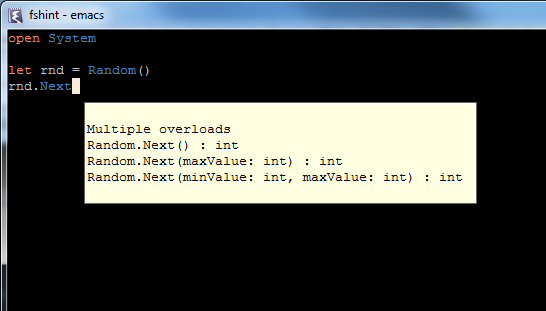 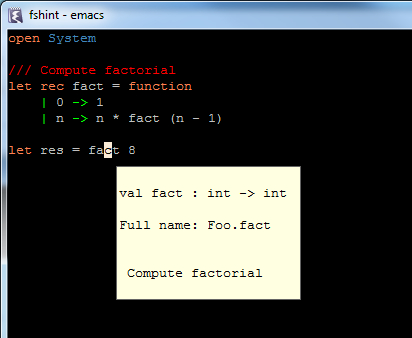 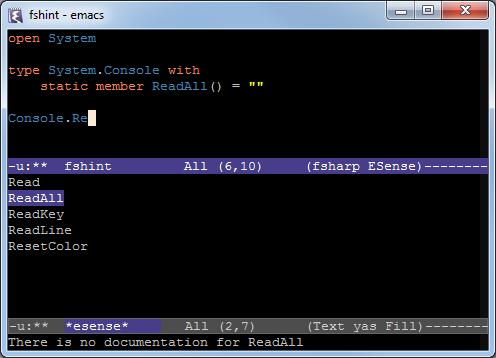 It is not ready for public release yet. There is still some work to do to make it easy to use. However, I lack time and I wish some people could help. Most of the work has been done. There is still a couple of things to improve, both on the Emacs code and on the F# code. If you are interested, you can try this Intellisense prototype from SVN on Sourceforge. I can give write access to people willing to contribute.

They posted on the same topic